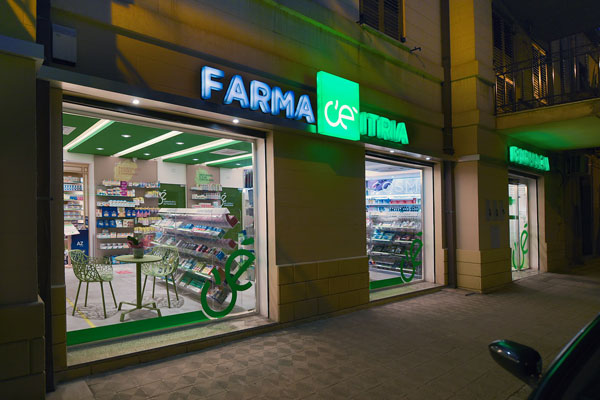 02 Aug PHARMACY SHOP WINDOW at the TIME OF COVID

Posted at 16:58h in Blog+novità by damiano
0 Likes

PHARMACY SHOP WINDOW at the TIME OF COVID 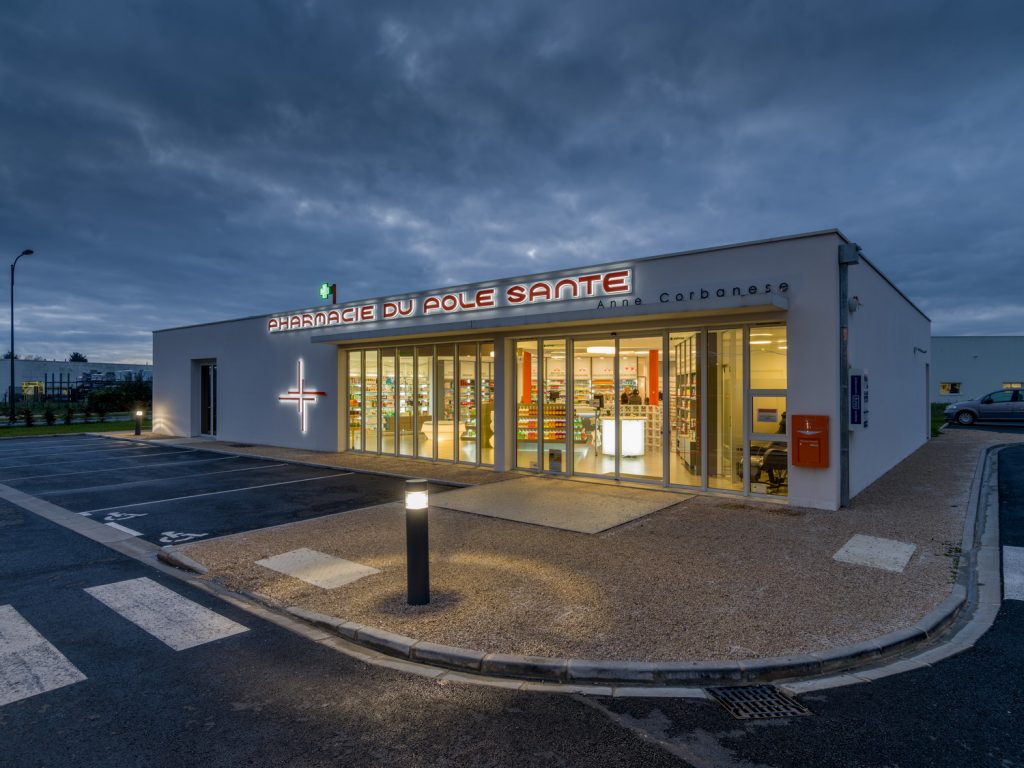 Experts and scientists are already talking about a fourth wave of Covid. It is quite evident beyond any expectation that we have not overcome the pandemics. We will be required also throughout the next few months as to cope with habits and behaviors in line with the responsibility shown during the last year and a half: selected accesses and more purchase allowance, security needs, lines management to avoid crowd and so on. People say that now more than ever the shop window has a more crucial impact than before on the pharmacy business as a whole. Potential clients are less incline to enter the premises unless they are fully convinced. They check from the outside if the pharmacy is full, if there is a long waiting time, and if there is enough product offer on display. Do you agree with that? Do you believe the shop window’s role has increased because of pandemics or stay the same?

Nowadays clients access supermarkets to shop. They step through the threshold and, coping with social distances, wait in front of counter desk for meat, bread, salami and then get through the cash register before leaving the place. In many pharmacies instead clients wait outside. That is a fact! It is about a space but also about the way people perceive that very space. If it is all about PERCEPTION then it is important to analyze the experience the pharmacy is able to offer its clientele: – Do people wait before the counter throughout a random range of manufacturers’ displays or they stand in luminous, welcoming and challenging premises? – Is the pharmacy a place to get the prescription or a modern concept of a “Health Centre” where tailor-made treatments can be envisaged (consultancy + product)? Shop window is as important as in the pre-pandemics period.

The new purchase habits affect trends of furnishing that a generalist retail had already started to be consolidated: clean shop windows are now a must, no more display units, products or decorations. Windows are actually becoming a real opening on the shop internal layout. Transparency is said to be an invite to enter. A sort of spaciousness is particularly suitable at the time of Covid to make people understand what is going to happen once they are inside. Do you reconcile with the fact that transparency is now a crucial strategy for shop windows? Is it due to the Covid or there are new purchasing biases coming through? Is it the end of the social hyperconsumption model? 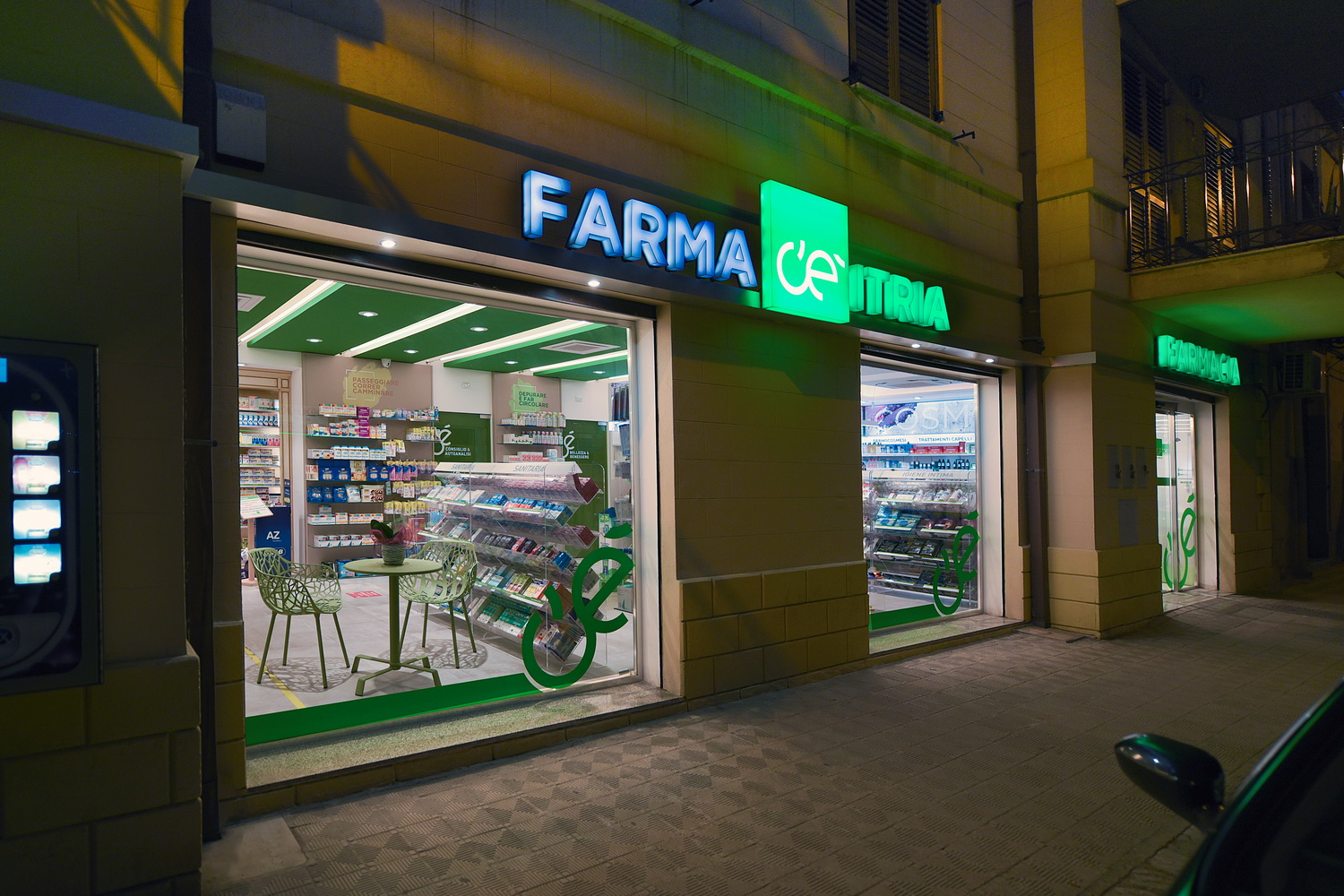 We have in Sartoretto Verna always privileged “clean” shop windows. The target is to better communicate the offer (from outside) and increase the room perception (from inside). That being said, giving up shop window’s function could be later translated into a lose of display footage. We have introduced a transparent Plexiglas system of central stands on wheels (i.e. Go-plexy®) to cope with this very problem. The Plexiglas used is a 100% recycled material which can fit each environment and allows a very tidy products display thanks to the modularity of several available accessories. They can be placed perpendicularly to the shop windows and make the be visible already from the street frontage. The communication to clients already starts on the outside footage and get finalized inside with a foreseeable purchase. 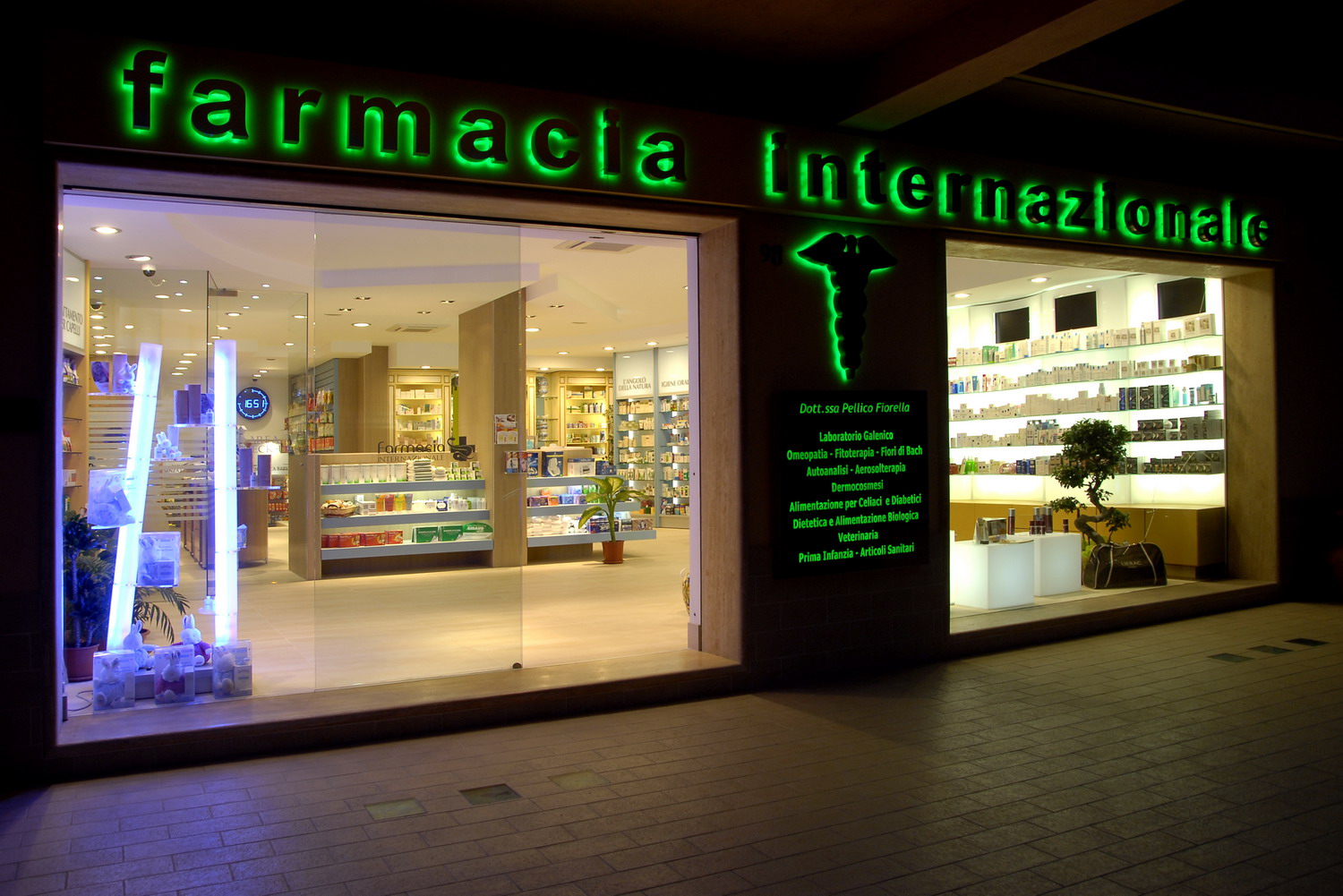 Pharmacy’s perception: authority, professionalism and quality of the proposal are achieved throughout a clear subdivision of internal areas.

Shop window is a communicator toolkit as well. It can show what the Pharmacy’s offer is. How transparency and communication can successfully meet? At the present time some of the pharmacy communication is actually happening on the sideway before the entrance.

Transparency and communication can perfectly meet if the pharmacy architecture looks appealing and captivating. Clearing the shop window area is not enough. Interior Design is a concept affecting furniture, lighting, colors and materials’ strategy. It defines the Pharmacy premises as a whole and make the commercial proposal, the company mission and its own values be immediately received. 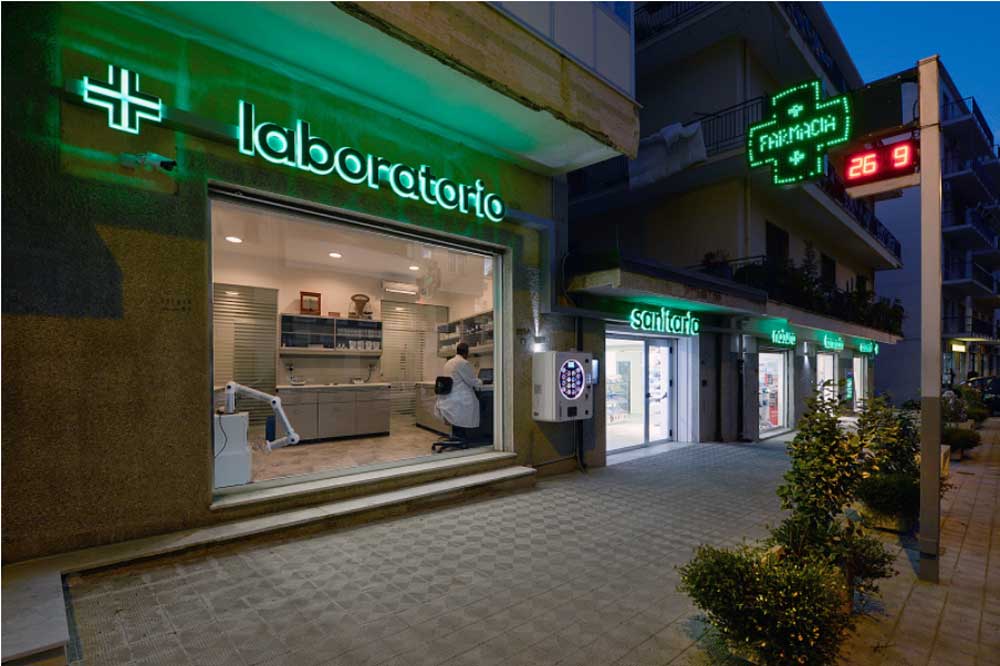 Visible Compounding & Lab can be animated through transparent LED screens 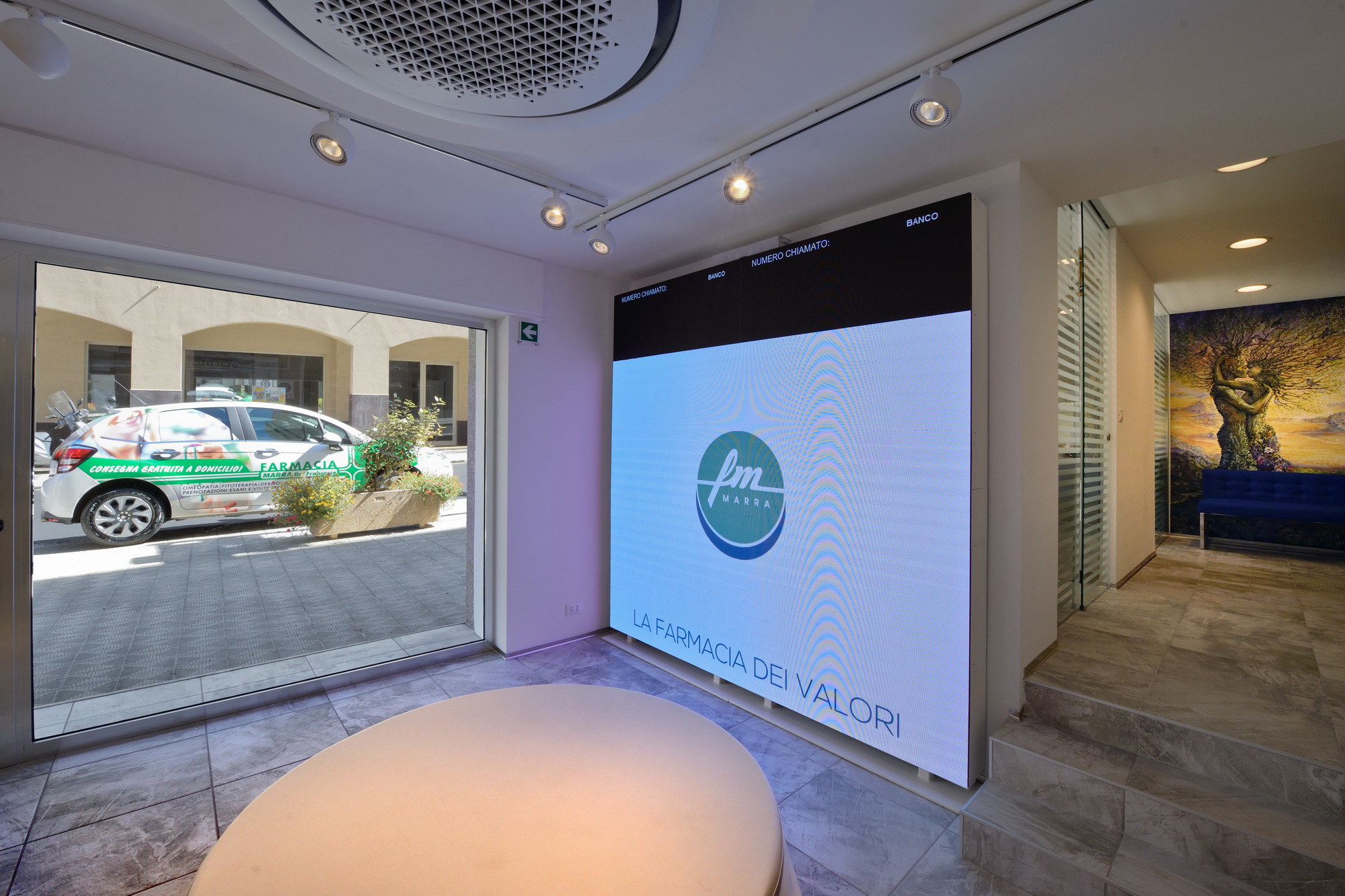 Some of the street signages for example (i.e. Lloyds and Cef) have tried to resolve the aforementioned dilemma with an instrument called “vidiwall”, enabling to put together more communications and marketing “claims” in just one screen. The more extended part of the shop window is then left available to show the retail area. What do you reckon about that? Do you think there are other ideas or instruments worth being furtherly explored?

We went through several models of transparent led screens on the shop window with the purpose of merge digital communication with the pharmacy footage. For example, we made laboratories come to life by some “virtual animated” figures of pharmacists involved in medicine preparation. In other situations, we implemented inside the pharmacy some mega-screen or banners which were visible also from the street. The aim has been to break the mold to attract and communicate with a more and more comprehensive audience.

Before the idea of transparency was coming over, it was very popular to use some adhesive films sized big enough to cover the shop window glass up to one meter height (at least). They used to represent a chance to advertise some lines of products. What do you reckon about that? They could still have a future or they make no sense? And what about the window stickers to advertise services or alike? Is it better to go for big sizes in order to catch the eye or cleanness and transparency must always prevail?

We do believe that films or window stickers make the pharmacy image too commercial, and too close to the pharmacy chain standards. These options “scream” but do not “talk”. They claim to sell with no chance to listen though. We are lately using some digital films which can be tinted in order to stress all the footage dedicated to services and pharmacy consultancies 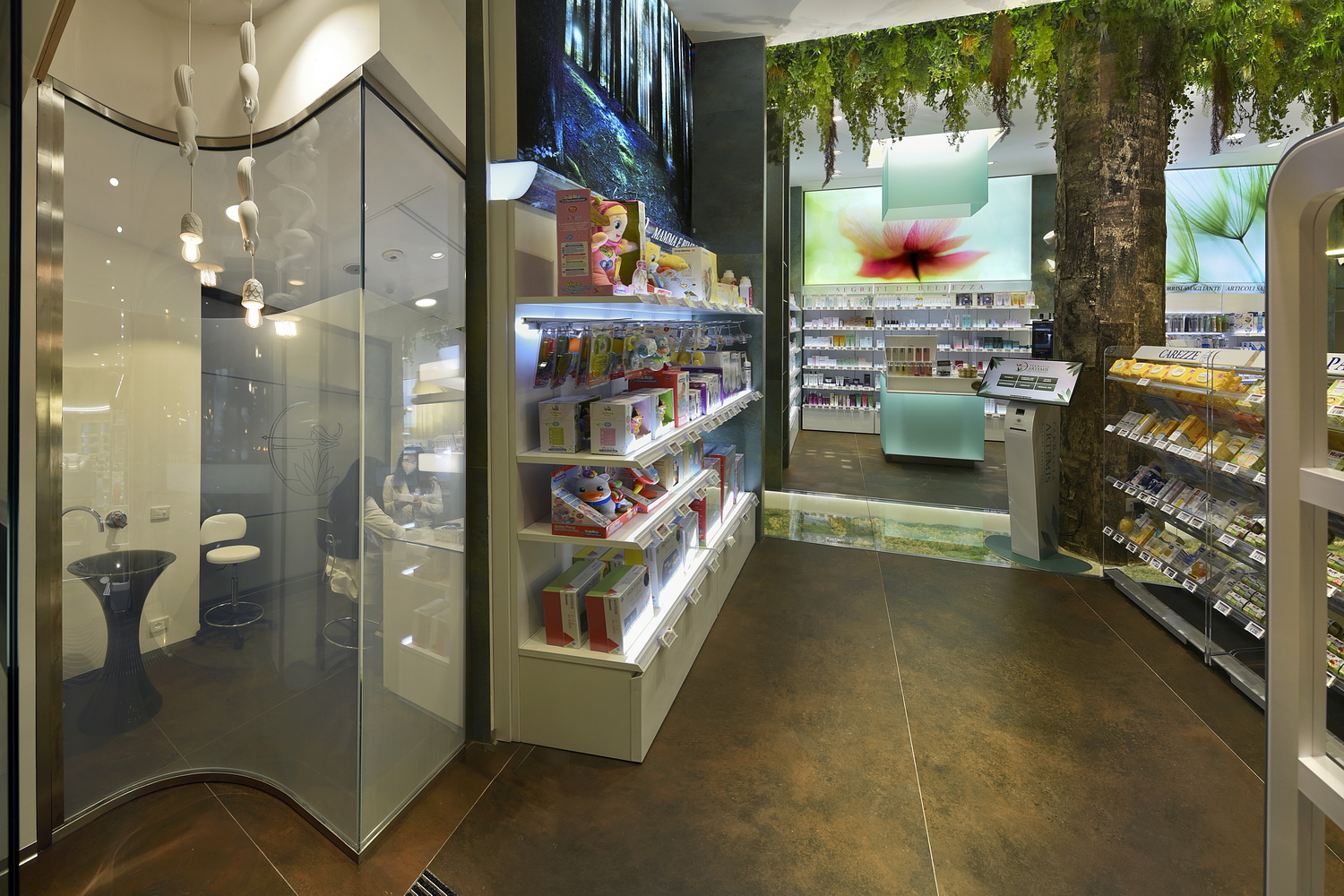 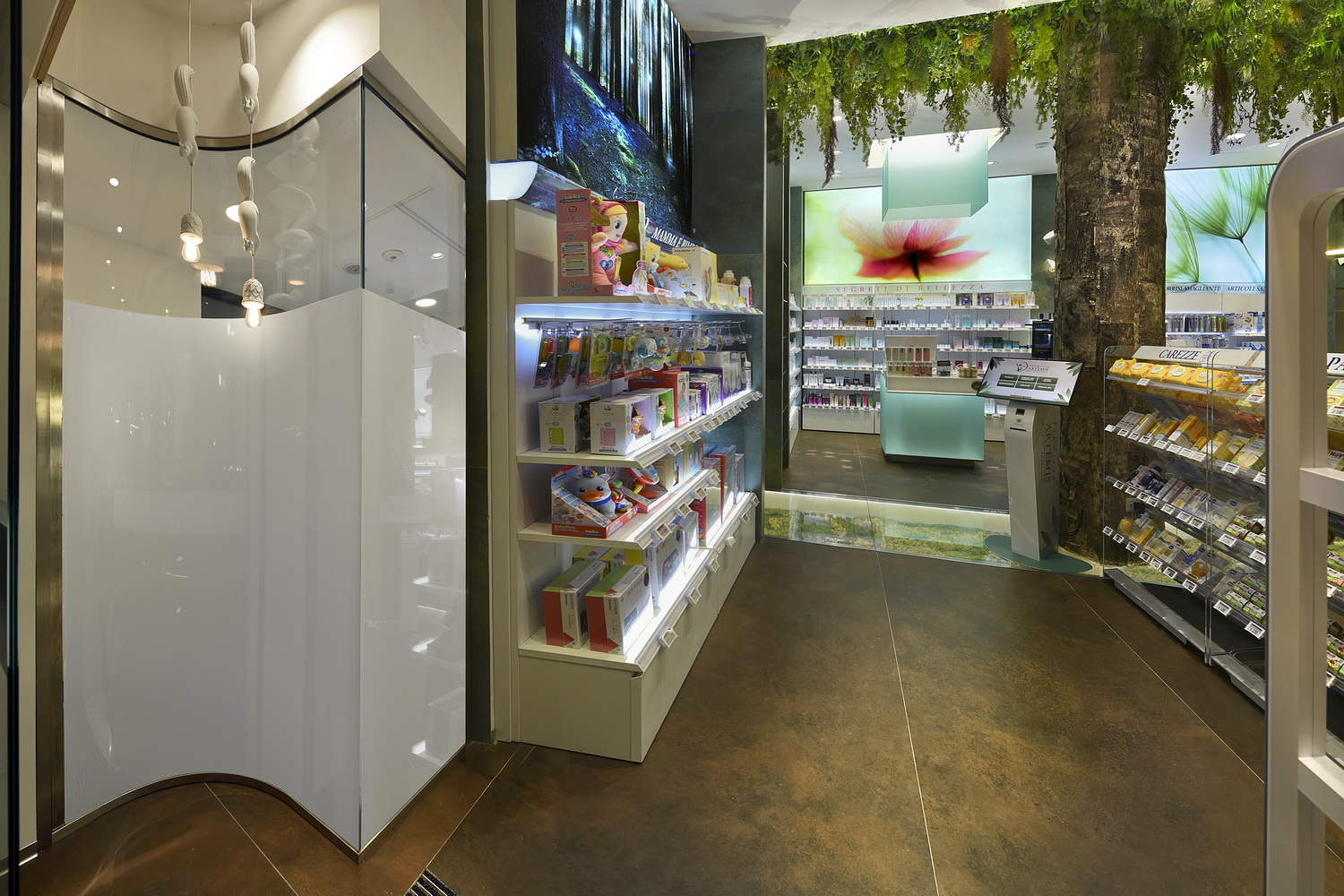 A digital film inside the glass allows, thanks to a switch, to completely tint the glass visual transparency

EXPERIENCE THE DIFFERENCE, book a virtual appointment within our showroom, also via whatsapp or conference call.