05 Dec Opened, the new Pharmacy of the “Mir Sanario” chain in Astana – Kazakhstan

Posted at 11:48h in Blog+novità by damiano
0 Likes 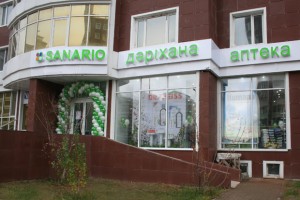 The first signiture SV pharmacy has opened in Kazakhstan! It’s located in the capital city of Astana and on one of the most important streets just in front of the Cabinet. The opening marks the first pharmacy in Kazakhstan to have a totally different concept of space and served by automation. It has made headlines since the first day of opening, with a lot of people from Astana coming to visit and to admire it. Even the state television has involved this pharmacy for some of its programming. But what’s the big news? What’s new with this pharmacy? Well, the “Mir Sanario” pharmacy chain now offers to its customers a new and brighter image that has moved with the radical changes that are happening in the city of Astana which is now being promoted as the “Asian Dubai”. In fact, Astana will host the next World Expo in 2017.

With an amazing skyline that’s in constant evolution as a backdrop, this modern and efficient pharmacy is positioned next to new buildings such as the Khan Shatyr Foster and follows the progress of the city.

A pharmacy that shows its customers how to live in Wellness by advising and offering them the newest products dedicated to health. The “Mir Sanario” pharmacy chain was the first to the market to invest in a new image of a Pharmacy technologically advanced with the functional and aesthetical appeal of SV signature design, and this winning choice has already brought a considerable increase in profits in just a few weeks.

The project creates separate and clearly defined product areas that reflect the colors of the logo chain, the products reach out to the customer in a direct and clear way. The Baby sector has a baby area where children can play while their mothers continue shopping. The additional services that the pharmacy offers now have plenty of space as well in the newly designed consulting rooms. Additionally, the pharmacy offers many new facilities: all the Pharmacy is wireless, and there has been a call center installed dedicated to those who need it, so now you can order medicine by phone and have it delivered at home. The materials are all made of glass, aluminum and light. The Prescriptions area is now managed by a Twintec Technilab robot, so the service has become faster, but ironically people still want to spend more time in the pharmacy because it’s a blast to pass time in the future!